In case you were wondering, reviewing for Northern Soul is incredibly glamorous. For instance, last week I spent a night in a shipping container under the Mancunian Way.

Shipping containers are ‘in’ as we used to say. Restaurant critic Jay Rayner raves about BOX-E in Bristol and Riley’s Fish Shack in Tynemouth, and even well known catering journal Marine Insight lists ‘The Top 8 Restaurants Made From Shipping Containers’.

Hatch is made from several shipping containers but I don’t think it’s going to make that list. Not because it’s not good and fun and worth a visit but because it’s clearly not chasing a coherent eating policy. Did I just write that? Good grief. But it’s true. A coherent drinking policy, yes, because the enterprise is rooted in a branch of TAKK, Manchester’s Northern Quarter coffee house, and, in its new incarnation at Hatch, ÖL, a nano-brewery and keg bar. But the food comes from four small kitchens in containers across a fairy-light-lit courtyard opposite the bar. 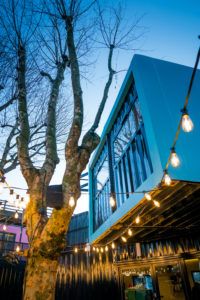 Each of the kitchens is occupied by a separate trader serving hungry souls through a hatch. Geddit? Then you take your food away or into the bar or upstairs to another container converted to a relaxed dining space. And there are toilets, which are quite lavish, considering. The plan is for the occupants of the kitchens to change every couple of months, allowing different caterers a chance to promote their wares, and the regular punter a varied diet. On the night we’re here it’s the British Street Food Awards finalists and purveyors of poutine, Blue Caribou Canteen; El Machador, a Mexican street food vendor; Eat and Sweet, the Northern Quarter Jamaican take-away; and Well Hung which specialises in flat iron steak and is an outpost of the rather good Beastro in Spinningfields.

Our dining experience is not typical. For the occasion, Hatch has turned the upstairs unit into a dining room for 20 people and the food is brought to us. And we don’t have to pay for it. All that apart, I’m sure everything else is the same. I hope so because it was almost entirely delicious. We start with El Machador’s antojitos, an assortment of Mexican nibbles including a soft tortilla with a good salsa, a flauta (a taco rolled like a cigar filled with potato and spices), mini sopes (maize meal soaked in lime and then mixed with cheese, garlic and onions and deep fried)and guacamole.

Eat and Sweet gave us curried goat with rice, peas and plantain. I like goat, and would have liked this a little goatier. I’ve never eaten plantain before – it looks disturbingly like banana, and I can barely be in the same room as a banana, but needs must – and it wasn’t like a banana at all. Perhaps I was too wound up by the idea it might taste like banana to do it justice, but I thought it a little plain.

I love flat iron steak. Also known as feather blade, it’s a cut from the shoulder and very tender if quickly seared. Ours was perfectly cooked, pink and soft. I liked it so much I went back a couple of days later and this time it was a little bit chewier, but if anything tastier, and at £5 for a big sandwich a total bargain. And they do good chips. 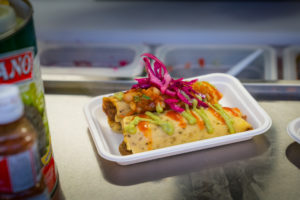 Blue Caribou produced a deconstructed Tarte Tatin. The apples were deep fried and looked like fries, some broken pastry was mixed in and the whole thing topped with a curd ice cream and caramel sauce. The ice cream and caramel sauce were delicious, the apples and pastry not so much. The thing about deconstructions is that there is a reason why these things were constructed in the first place. Like a bridge, if you take it to pieces then how do you get to the other side? Tarte Tatin has always been a bridge to pudding heaven for me and this time I didn’t quite make it.

The beer at ÖL is perfectly quaffable, though. I drank Sonoma Pale Ale from Manchester-based brewer Track, which was malty but quite light. ÖL was shut when I went back for lunch but I shall return for a beer from its nano-brewery and another go at the goat, and eat it in a shipping container. It doesn’t get zeitgeistier than that. 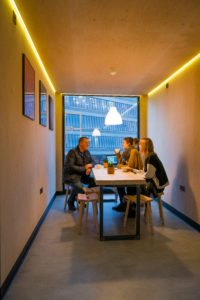